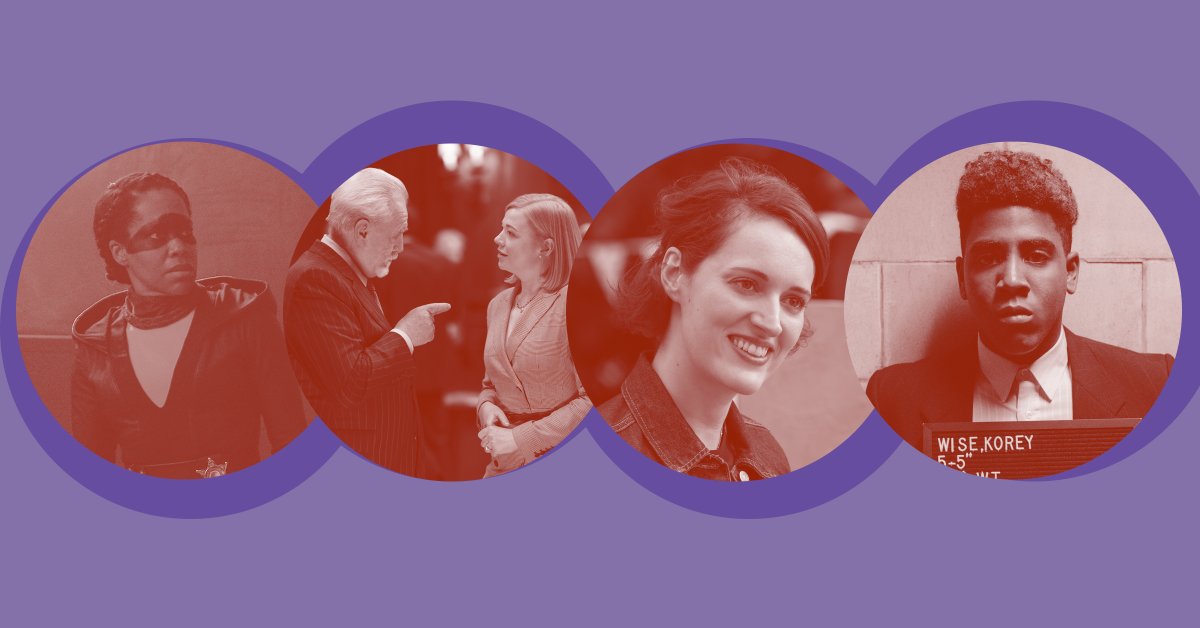 List season has hit particularly hard this year, as the end of our first full decade of social media immersion has culminated in a multi-month spree of ranking and revisiting the likes of which humanity has probably never seen before. So I feel compelled to open by thanking you, the reader, for giving yet another highly subjective hit parade your attention.

My hope is that along with a few of the zeitgeisty critical darlings (Fleabag, Watchmen, Succession) you’re sure to find in every other top 10 of 2019, this list will point you in the direction of some equally wonderful series (Vida, David Makes Man, Back to Life) that haven’t gotten the shine they deserve. What you won’t find here, incidentally, is anything from the initial slate of shows on brand-new streaming services Apple TV+ or Disney+. Whether that disappointment turns out to be a pattern or a fluke, only time will tell.

Few characters have embodied the saying “you can’t go home again” as fully as Back to Life creator Daisy Haggard’s Miri Matteson. Out on parole after spending half her life in jail for a crime she committed at age 18, Miri returns to her small English hometown—not because she’s missed the place, but because she has nowhere to go but her parents’ house. While enduring harassment at the hands of neighbors who will never forget what she did, she struggles to find work, companionship and peace. From the producers of Fleabag, this quieter, gentler traumedy weighs Miri’s crime against the less extreme but more malicious transgressions of her family and friends. It poses the question of whether anyone who pays their debt to society really gets a fair chance to start over—and it suggests that you can tell a lot about a community by getting to know its scapegoats.

Ava DuVernay is the rare popular artist fueled by an irrepressible optimism about building a better future as well as righteous anger about the past and present. She brought both of these defining traits to bear on this four-part drama about the Central Park Five—whom her miniseries rechristened the Exonerated Five. Along with exposing how and suggesting why a broken New York City criminal justice system was so eager to vilify blameless children of color in the aftermath of a monstrous act of sexual violence, DuVernay and her stellar young cast worked with the real Five to create multifaceted portraits of regular kids with hopes, ambitions and communities that suffered as a result of their incarceration. And she found echoes of their story in the current movement against mass incarceration and in the presidency of Donald Trump, who stoked public fury at the boys. When They See Us celebrates the righting of a grievous wrong while acknowledging that no vindication, or remuneration, could fully heal such deep wounds.

For those of us who haven’t enjoyed our culture’s never-ending superhero craze so much as endured it, the news that the most prestigious of all prestige cable outlets was adapting a DC Comics book sounded kind of like a betrayal. Et tu, HBO? But we should never have doubted The Leftovers creator Damon Lindelof’s ability to make Alan Moore’s brilliant, subversive 1980s classic resonate more than three decades later. Instead of revisiting the Cold War, Lindelof set his Watchmen in an alternate 2019 where the events of the comic are canon, Robert Redford (yes, that one) has been President for decades and a white supremacist group called the Seventh Kavalry is slaughtering police who are loyal to the liberal administration. Into this mess rides masked vigilante Sister Night (Regina King, in the would-be hero role she’s long deserved), a cop who is supposed to have retired from crime-fighting. There is (or should be) enough carryover from Moore’s original to appease its cult fandom, but the show is at its best when contending with our confused, misinformed, politically polarized current reality. And in that respect, it’s every bit as intelligent, provocative and mysterious as it is entertaining.

Fans worried that BoJack Horseman mastermind Raphael Bob-Waksberg would turn out to be a one-hit wonder could take comfort in this wildly imaginative sci-fi dramedy that he co-created with Kate Purdy, about a disaffected young woman (Rosa Salazar’s Alma) who narrowly survives a catastrophic car crash. In hospital-bed visions tied to her sudden physical trauma and preexisting mental illness, Alma reunites with her long-dead father (Bob Odenkirk), learns that he was murdered and allows him to guide her on a time-travel mission to prevent the crime from happening. Yet Undone is more than just a high-concept mystery; it’s a journey into human consciousness, a beautiful example of Rotoscoped animation and a subtle meditation on family, identity and spirituality.

The success of Moonlight sent ripples through Hollywood, elevating writer-director Barry Jenkins and a cast including Mahershala Ali, Jharrel Jerome and Janelle Monáe to the highest echelon of their art form. It also opened industry doors for MacArthur honoree Tarell Alvin McCraney, who wrote the play on which the film was based. This year he unveiled David Makes Man, a lyrical drama about a smart, troubled 14-year-old (Akili McDowell, astonishing in his first lead role) in the Florida projects who’s struggling to get into a prestigious high school and avoid being drafted into a gang, while mourning a mentor. Though it shares a lush aesthetic and many themes—black boyhood, complicated role models, queer identity—with Moonlight, the expanded format allows McCraney to explore the people around David. His privileged best friend (Nathaniel McIntyre) suffers abuse at home. His gender-queer neighbor (Travis Coles) takes in runaway LGBT teens and plays a delicate role in the local ecosystem. And his single mother (Alana Arenas), an addict in recovery, holds down a degrading job to keep the bills paid. This isn’t just the old story of excellence and poverty battling for the soul of one extraordinary child; it’s the story of a community where both qualities must coexist.

At least once a year, a series too smart for prime-time gets canned even as network execs re-up long-running bores like NCIS for 24 more functionally identical episodes. In 2019, it was Lodge 49 that ended up on the wrong side of the equation. A loose, semi-stoned account of a young man (Wyatt Russell’s Sean “Dud” Dudley) treading water in the wake of his beloved father’s death, the show expanded over the course of its first season into an allegory for the isolation of contemporary life. The Southern California landscape around Dud, an affable dreamer, and his self-destructive twin sister (Sonya Cassidy) had been scarred by pawn shops, breastaurants, temp agencies, abandoned office parks. Refuge came in the form of the titular cash-strapped fraternal organization, where Dud found two precious things late capitalism couldn’t provide: a sense of community and a mysterious, all-consuming quest. Both propelled him and his cohorts to Mexico in this year’s funny, bittersweet second season; perhaps sensing the end was near, creator Jim Gavin’s finale provided something like closure. Still, the show—which is currently being shopped to streaming services—has plenty left to say. Here’s hoping the producers find a way to, as the fans on Twitter put it, #SaveLodge49.

In its short first season, creator Tanya Saracho’s Vida assembled all the elements of a great half-hour drama. Mishel Prada and Melissa Berrera shined as Mexican-American sisters who come home to LA after the death of their inscrutable mom, Vida—only to learn that the building and bar she owned are on the verge of foreclosure. It also turns out that Vida, whose homophobia destroyed her relationship with Prada’s sexually fluid Emma, had married a woman. Meanwhile, their angry teenage neighbor Mari (Chelsea Rendon) raged against gentrification. These storylines coalesced to electrifying effect in this year’s second season, testing the sisters’ tense bond as they found themselves in the crosshairs of activists who saw their desperate efforts to save the family business as acts of treachery from two stuck-up “whitinas.” Thanks largely to the talented Latinx writers and directors Saracho enlisted for the project, Vida brings lived-in nuance to issues like class, colorism and desire—yielding one of TV’s smartest and sexiest shows.

Right-wing tycoons and their adult children have gotten plenty of attention in the past few years—most of it negative. So why would anyone voluntarily watch a show in which the nightmare offspring of a Mudoch-like media titan (Brian Cox) compete to become his successor? A rational argument for all the goodwill around Succession might point out the crude poetry of its dialogue (from creator Jesse Armstrong, a longtime Armando Iannucci collaborator), the fearlessness of its cast (give Jeremy Strong an Emmy just for Kendall’s rap) and the knife-twisting accuracy of this season’s digital-media satire (R.I.P. Vaulter). But on a more primal level, one informed by the increasingly rare experience of watching episodes set Twitter ablaze as they aired, I think we’re also getting a collective thrill out of a series that confirms our darkest assumptions about people who thirst for money and power. It’s a catharsis we may well deserve.

To observe that there was a built-in audience for a show created by Natasha Lyonne, Amy Poehler and Leslye Headland in which Lyonne starred as a hard-partying New York City cynic might’ve been the understatement of the year. But even those of us who bought into Russian Doll from the beginning could never have predicted such a resounding triumph. In a story built like the titular nesting doll, Lyonne’s Nadia Vulvokov dies in a freak accident on the night of her 36th birthday. The twist is, instead of moving on to the afterlife or the grave, she finds herself back where she started the evening, at a party in her honor. Nadia is condemned to repeat this cycle of death and rebirth until she levels up in self-knowledge—a process that entails many cigarettes, lots of vintage East Village grit and a not-so-chance encounter with a fellow traveler. Stir in a warm, wry tone and a message of mutual aid, and you’ve got the best new TV show of 2019.

Fleabag began its run, in 2016, as a six-episode black comedy about a scornful, neurotic, hypersexual young woman caught in a self-destructive holding pattern of her own making. The premise didn’t immediately distinguish creator and star Phoebe Waller-Bridge as all that different from peers like Lena Dunham, Aziz Ansari and Donald Glover. But the British show’s execution was sharp, funny and daring enough to make it a cult hit on both sides of the Atlantic—and to anoint Waller-Bridge as TV’s next big thing. She went on to helm the exhilarating first season of Killing Eve, giving this year’s second and final season of Fleabag time to percolate. It returned as a more mature but, thankfully, no less audacious show, matching Waller-Bridge’s somewhat reformed Fleabag with an impossible love interest known to fans as the Hot Priest (Andrew Scott). The relationship offered a path to forgiveness for the kind of character most millennial cris de coeur have been content to leave hanging. By allowing Fleabag a measure of grace without sacrificing her life-giving vulgarity, Waller-Bridge conjured the realistic vision of redemption that has so far eluded her contemporaries—and closed out the 2010s with the decade’s single greatest season of comedy.

What It’s Like to Never Ever See Yourself on TV